A small family farm transformed into

one of the most diverse producers in the country

Howe Farming Group is a second generation family owned company. Tom and Yola Howe began growing tobacco and vegetables in the early 1950’s in Bilwon, located just outside of Mareeba, Queensland. In 1975 the family purchased the Home Farm at Chewko Road, Walkamin. After the completion of his Bachelor of Engineering degree with Honours in 1976, their eldest son Dennis Howe took the reigns of the family farm, and with the help of his siblings built the small family business into the diverse enterprise Howe Farming Group is today. In 1979, Howe Farming commenced growing avocados and by the early 1990’s, were share farming peanuts throughout the Tablelands. The first bananas were planted in 1996 and coffee in 2000. Today, Howe Farming Group own numerous farms strategically located across the Atherton Tablelands in North Queensland. The group employs over 450 staff including seasonal workers, and has grown to become the largest private employer on the Tablelands. The business is owned by Dennis and his 3 sisters – Christine, Geraldine and Bernadette, and maintains a corporate structure. Their brands include: Bananas with Altitude, Avocados with Altitude & Coffee with Altitude.

In 2016, Dennis was awarded the Australian Farmer of the year – Award for excellence in technology & Farming Legend of the year. 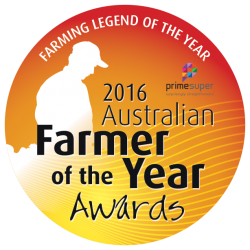